The Meru, Amîîrú, “Ameru” or Ngaa people are a Bantu ethnic group that inhabit the Meru region of Kenya on the fertile lands of north and eastern slopes of Mount Kenya, in the former Eastern Province of Kenya. The name “Meru” refers to both the people and the region, which for many years was the only administrative unit. In 1992, the Greater Meru was divided into three administrative units: Meru Central, Meru North (Nyambene), and Tharaka-Nithi (Tharaka and Meru South). After the promulgation of a new constitution in Kenya on 27 August 2010, the Greater Meru was further re-defined and now consists of the twin counties of Tharaka-Nithi and Meru. The Greater Meru covered approximately 13,000 km2 (5,000 sq mi), stretching from the Thuci river, on the border with Embu County in the south, to the border with Isiolo County in the north.

The Ameru people comprise nine sections: the Igoji, Imenti, Tigania, Mitine, Igembe, Mwimbi, Muthambi, Chuka and Tharaka. The Tharaka live in the semi-arid part of the greater Meru and they, together with the Mwimbi, Muthambi and Chuka, form the Tharaka-Nithi County. The Ameru are however unrelated to the Wameru of northern Tanzania, other than both being avid farming Bantu communities.

The Ngaa people known as Meru speak the Kimîîrú language. Kimîîrú, Kikamba, Kiembu, Kimbeere, Kisii and Kikuyu share critical language characteristics. The Kimîîrú language is however not uniform across the Greater Meru but comprises several mutually intelligible dialects depending on the section from which the speaker originates. More importantly, each of the dialect is a reflection of previous migratory patterns, the level of intra-community interactions, and the influences of other adjacent Bantu, Nilotic and Cushitic communities. As a whole language scholars have demonstrated that the Kimîîru language exhibits much older Bantu characteristics in grammar and phonetic forms than the other neighbouring Bantu languages.

The Ngaa people are of Bantu origin.  Like the closely related Kikuyu, Embu and Mbeere they are concentrated in the vicinity of Mount Kenya. The exact place that the Ameru ancestors migrated from after the initial Bantu expansion from West Africa is uncertain. Some authorities suggest that they arrived in their present Mount Kenya area of in habitation from earlier settlements further to the north and east, while others argue that the Meru, along with their closely related Eastern Bantu neighbors the moved into Kenya from points further south.The actual migration route is traced to be the east African coast (mboa).The migration from eastern African coast/Mboa/mbwaa was North of River Tana.This implies that they are the earliest inhabitants of Kenyan coast unlike the neighbouring bantu tribes.The most notable is that there exists differences in culture between the meru(Ngaa)and other neighbouring bantu tribes . 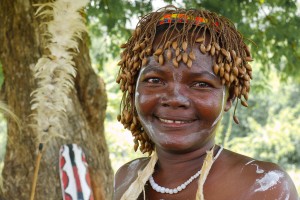 The Ameru have since the 17th Century been governed by elected and hierarchical councils of elders from the clan level right up to the supreme Njuri Ncheke Council. To become a member of the Njuri-Ncheke is the highest social rank to which a Meru man can aspire. The elders forming the Njuri-Ncheke are carefully selected and comprise mature, composed, respected and incorruptible members of the community. This is necessary as their work requires great wisdom, personal discipline, and knowledge of the traditions. The Njuri Ncheke is also the apex of the Meru traditional judicial system and their edicts apply across the entire community.

The functions of the Njuri-Ncheke are to make and execute community laws, to listen to and settle disputes, and to pass on community knowledge and norms across the generations in their role as the custodians of traditional culture. Local disputes will invariably first be dealt with by lower ranks of the elders (Kiama), then the middle rank (Njuri) and finally the Njuri-Ncheke. However, Njuri Ncheke does not handle matters involving non-Meru people, or those that are expressly under the Kenya’s common law. Interestingly, the determination of cases by the Njuri Ncheke, just like is for common law, relies a lot on case law and precedence.

A lesser known, yet important function of the Njuri-Ncheke, is the overseeing and enforcing the rules and regulations controlling the use and conservation of open grasslands, salt-licks and forests. Their work as conservators extends to the preservation of the Sacred Sites.

The Njuri Ncheke is also influential in the socio-economic and political decision making amongst the Meru. The Council of Elders spearheaded the establishment of the Meru College of Science and Technology and donated 641 acres of community land in 1983 for its siting and development. The college was in 2008 upgraded to a University College of Jomo Kenyatta University of Agriculture and Technology (JKUAT) and in early 2013 awarded a charter by H.E Mwai Kibaki – the then President of Kenya and renamed Meru University of Science and Technology(MUST). Njuri Ncheke is represented in the University Council.

The Meru are primarily agrarian, and their home life and culture is similar to other Highland Bantus. The Meru have maintained adherence to a fairly strict customary code amongst the various cohorts of the population. For instance circumcision is still a mandatory rite of passage for boys during which time cultural education including community norms and expectations, such as respect for elders and protection of children are taught in a seclusion period that may last up to a month. As a matter of principle, young men must ensure minimal contact with their “Mothers” after initiation. Nowadays however the depth of instruction varies depending on the extent of urban influence. Previously, girls would also undergo circumcision, but the practice was outlawed by Njuri Ncheke in April 1956. The practice has been progressively abandoned and is being replaced by instruction based alternative rites of passage.

The Meru have had a strong modern educational heritage provided by the Christian missionaries. The main education institutions were started or sponsored by the Catholic, the Methodist and the Presbyterian Churches.